"We had 5 divers for this second club trip to Shouten Island this year. Amazingly the weather gods again were smiling and we had a warm, sunny day with low swell and only moderate NE winds. Two trips programmed to Cape Sonnerat in a year that both went. How lucky is that?
We launched out of Saltworks again, at the slightly later time than planned of 9:30am. The run across was smooth and we were at the cape in about an hour. We dropped a shot in 17m of water on the ridge running out from the cape. Janine and Wayne and Andrew dived first. Janine and Wayne were buddying on OC and Andrew was doing his own thing (after descending with us) on his Revo rebreather.

Wayne and Janine quickly dropped down the shot and over the lip of the ridge and into a narrow rift, about 3m wide. It was steep sided and the walls were covered on corals. It was beautiful. Janine stopped at 46m (running 26% o2) and Wayne slipped down the extra 4m to touch the sand at the bottom. They both then continued around the end of the rift and started up the ridge. The plan had been to ascend up the rift, looking at the walls, but the current was pushing out of it and it wasn't worth the struggle. They moved slowly up and found weed at 30m and surge at 10m. Wayne did find quite a large Cuttlefish amongst the weed, and hopefully got good video of it. Deco was done on 100% o2. Total dive time was 60 mins. The visibility was poor, at about 10m and with a greenish tinge. That didn't stop the bottom (below 30m) section of the dive being stunning. This is a truly glorious dive site.

Mark and Stefan dived once Janine and Wayne were back in the boat. They planned a 60m dive (achieved 67m) on Heliox. Mark was OC and Stefan CC. They reported an excellent dive with a wonderfully interesting bottom.

Oh, and Wayne and Janine picked Andrew up after the other two dropped into the water.

Wayne was the only starter for a second dive and he was dropped in on the northern side of Tailifer Rock. He reported poor visibility again but a very interesting and beautiful wall dive. This is definitely worth another visit, as is more exploration in the area generally.

The sea breeze had kicked in before Janine and Wayne got out after their dive, so it had been a bit lumpy for the remainder of the day in that area. It was easily handled by "Y Knot", the club boat.

We started for home at 3:30pm and again had an easy run back with a tail wind assist again.
This was yet another glorious day out on the water, and under it, with a great bunch of guys.

"Another great club dive last weekend. We were heading for The Monkeys, off the SE tip of Tasman Island, however the..."
By Janine McKinnon

"We had 5 divers for this second club trip to Shouten Island this year. Amazingly the weather gods again were smiling and we had a..."
By janine McKinnon

"The arrangements for this day's dive were a little atypical. The dive organiser was to meet us at the South Arm boat ramp at..."
By janine mckinnon 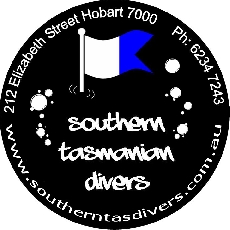